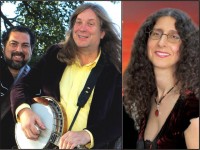 Jeff Scroggins is an acclaimed banjo player who has toured internationally with his band Jeff Scroggins & Colorado. A winner of the prestigious National Bluegrass Banjo Championship and dozens of state and regional banjo contests, Jeff’s fiery style and lightning-fast licks have earned him many fans worldwide. He also teaches for Swallow Hill Music in Denver, Colorado and is in demand as an instructor at many bluegrass music camps in the U.S. and abroad.

Jeff will be joined by band members Tristan Scroggins on mandolin and Greg Blake on vocals and guitar, with special guest Larry Cohen (Silk City, Skyline) on bass. Long Island’s own Martha Trachtenberg and Tom Griffith will also join him for this performance.
Mara Levine: Called one of the best singers of her generation by Christine Lavin, the folksinger and jewelry designer creates beautiful interpretations of fine traditional and contemporary folk songs. Reviewers have said Mara’s voice is reminiscent of folk icons Judy Collins and Joan Baez.

Mara’s second album, Jewels and Harmony, received stellar reviews, was the #1 album on the Folk DJ chart for January 2013 and placed #3 overall for 2013. Her version of Bob Franke’s “Straw Against the Chill” with Joe Jencks and her arrangement of Paul Simon’s “Leaves That Are Green” with folk-harmony trio Gathering Time both were #1 songs on the monthly Folk DJ charts.

Jeff Scroggins and his band, along with members of Gathering Time, will join Mara for this performance.