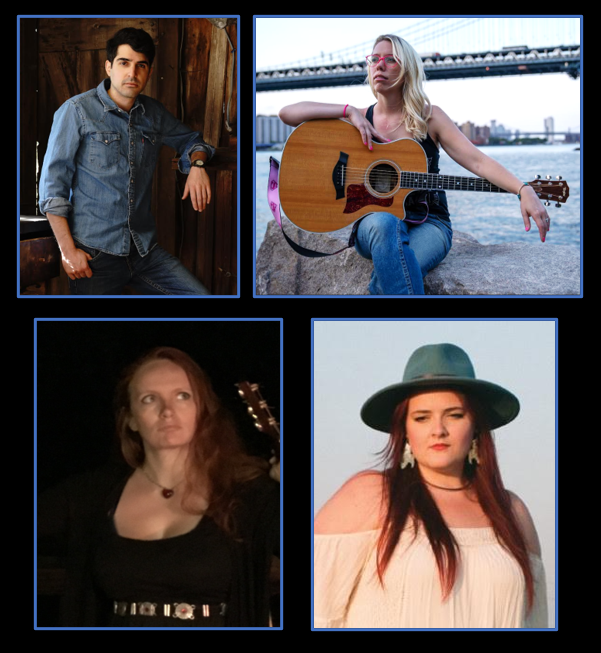 Long-Island-based singer-songwriters Pete Mancini, Nico Padden, Rorie Kelly, and Delaney Hafener of The Belle Curves will share the bill during the monthly Hard Luck Café series co-presented by the Folk Music Society of Huntington and the Cinema Arts Centre (423 Park Avenue, Huntington) in the Cinema’s Sky Room on Wednesday, December 21, from 7-10 p.m. An open mic precedes the concert.

Pete Mancini got his start as frontman and songwriter of Butchers Blind, a critically acclaimed rock band from NYC.  In 2017, he released his debut solo album, Foothill Freeway, which explored the Americana influences that were a hallmark of his former band. The album garnered rave reviews from NPR, No Depression, and Newsday. His follow-up albums have also been met with critical acclaim. Over the years, Mancini has opened for acts such as Jimmy Webb, Blues Traveler, Gin Blossoms, and Southside Johnny & The Asbury Jukes.

Nico Padden is a one-woman folk-rock riot. Ben Folds said she has “a big voice, gorgeous voice,” and that her song, “Pirate Queen,” is “original and classic at the same time.” Her songs have been compared to Alanis Morissette’s work in Newsday, and Smithtown Matters News called her a “soulful singer & lyricist.”  Her newest album is a mix of Americana, vintage pop/rock, and folk that celebrates the strength of the fierce, brave women in her life.

Rorie Kelly is an award-winning singer/songwriter/ladybeast from Long Island. Her mission in life is to spread healing through art, and to remind you to love yourself with the fierceness of a kitten that doesn’t know it is tiny.  Her songwriting looks deeply into topics like self-worth, growth and letting go, and how our culture treats people who don’t fit the mainstream “default.” A powerhouse performer, Rorie gigs frequently, lighting up stages with her fiery vocals and her sense of humor.

Delaney Hafener has crafted a unique sound inspired by the many traditions of Americana, complementing introspective lyrics and a songwriting style that can be reminiscent of both the Laurel Canyon and Bakersfield music scenes. Her music touches on themes of self-doubt, progressive politics, identity, and disaffection, working to create a distinctly youthful folk aesthetic.