Eric Schwartz and Shanna in a Dress 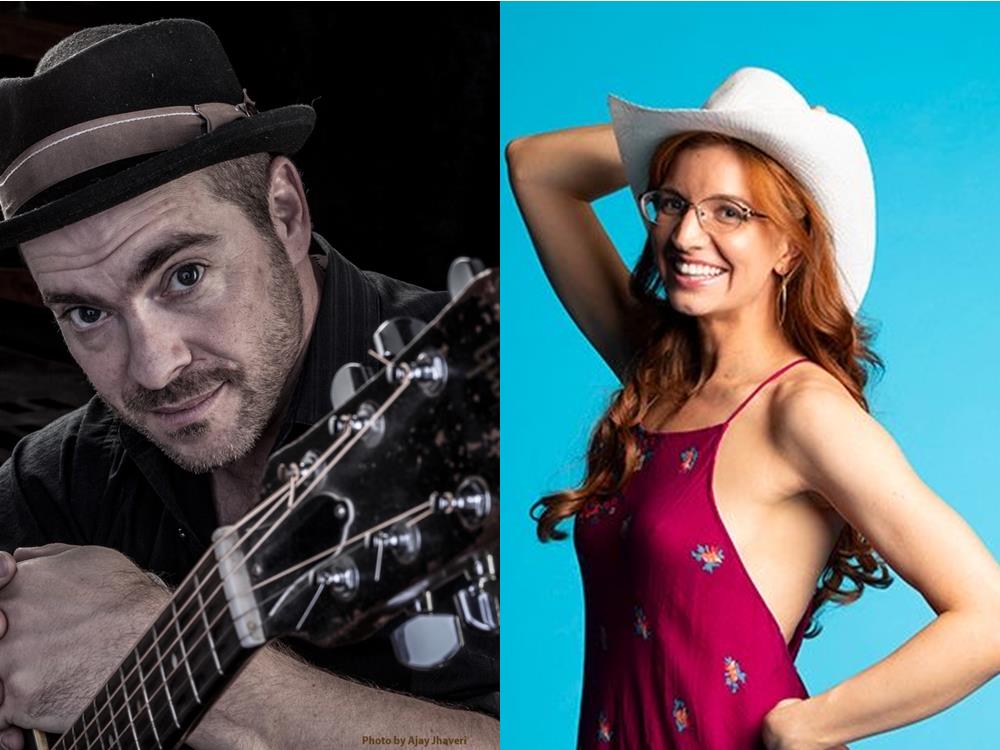 Eric Schwartz, Shanna in a Dress to Share Their Humorous Songs & Banter in Virtual Concert On Feb. 18 as part of the Folk Music Society of Huntington’s Monthly Hard Luck Café Series.

Witty Singer-Songwriters Eric Schwartz and Shanna in a Dress will swap songs live online from their respective homes on Thursday, Feb. 18, as part of the Folk Music Society of Huntington’s monthly virtual Hard Luck Café concert series that is held in partnership with the Cinema Arts Centre. The concert will livestream from 8-9:30 p.m. EST via the FMSH YouTube channel (http://www.youtube.com/channel/UCnJ9zJQXl2ml128-TIPRFLg/about) and Facebook page (http://www.facebook.com/FMSHLongIsland).

“Although the COVID-19 pandemic prevents the Folk Music Society of Huntington from hosting in-person concerts now, the FMSH board of directors recognizes the importance of music in these challenging times and believes that the show must go on-line,” said Michael Kornfeld, FMSH’s board president. Accordingly, artists are being booked for both the monthly Hard Luck Café and First Saturday Concerts series, and will livestream concerts from their homes to yours via various social media platforms. “There is no admission charge for this online concert,” Kornfeld notes: “However, tips for the artists — who have lost many gigs and are unable to tour due to the ongoing health crisis — would be most appreciated.” Information about online tipping will appear on your screens during the concert and also at Shannainadress.com/support .

An award-winning singer-songwriter, musical satirist, multi-instrumentalist and entertainer, Eric Schwartz (aka Eric “Red” Schwartz) has been prodding and wooing folk audiences for 25 years. Starting in the trenches of Greenwich Village’s Bleecker Street bars (remember the Back Fence?) and moving on to folk venues (NYC’s iconic The Bottom Line, Nashville’s The Bluebird Cafe, and Cambridge, MA’s Passim among them) and festivals (Philadelphia, Falcon Ridge, Kerrville and more), Schwartz uses his combination of cutting wit and soulful ballads to entertain and challenge. He’s often political, sometimes profane, and always honest.

Schwartz recently went on a global walkabout — across the United States, Europe, Africa, India and Southeast Asia (including a ten-hour stopover in Tokyo, where he gleefully consumed sushi in its home country). What he found was, well, the world has lots of people and most of them have cellphones. He’s thrilled to return to performing after a hiatus. He’s reinvigorated and ready.

Schwartz’s songs have been sung by Ronny Cox, Holly Near and Van Dyke Parks. His latest CD releases are The Aristocrat, which Paul Zollo (Songwriters on Songwriting) calls “a comic treasure” and The Better Man, about which the UK’s Rock ’n’ Reel writes “Eric is a great wordsmith…lots to enjoy here” and Berkeley, CA’s KALX Radio’s Brian Keathley hails as “a great collection of tunes with humor, and social commentary – some of which is damn profound.”

Shanna in a Dress, a winner in the prestigious 2020 Kerrville New Folk Competition, is your quirky best friend who refuses to wear pants. In her songs, she says what everyone is thinking but no one else will say, and you’ll get an uncensored journey of clever humor and heartbreak, along with a hefty side of entertainment at her shows that are also noted for her spontaneous banter and playful stage presence. Think Jason Mraz mixed with Ingrid Michaelson with a twist of Phoebe Buffay from TV’s Friends all wrapped up in a sweet voice accented by guitar, piano and ukulele.

Shanna started her musical career while a student at the University of Virginia, biked across the country and fell in love with Colorado. She now lives in Boulder, where she hosted a monthly Women in Song show prior to the pandemic. A clever wordsmith, she pens smart but accessible lyrics that have drawn accolades recently. Besides being chosen as one of six Kerrville New Folk Winners from among more than 700 applicants, Shanna was named the winner of the Great River Folk Fest Song Competition and a semifinalist in the Songwriter Serenade in 2020. She also performed in the Grassy Hill Emerging Artist Showcase during the virtual Falcon Ridge Folk Festival last summer.