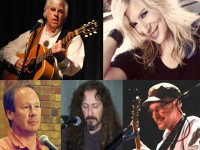 Gail Storm is a singer/songwriter/pianist who performs locally as well as on the national and international circuits. Her blues stylings embrace the root music she cherishes and provide a refreshing frame to other genres. The “Storm” is known to have a “heavy left hand” as demonstrated by her strong, rhythmic bass lines-particularly evident in the “boogie woogie”.

Storm performs in a wide variety of venues (solo or as bandleader) and has radio, film and television appearances to her credit. She has opened for Maria Muldaur, Henry Butler, and Bakithi Kumalo (of Paul Simon). As bandleader, Gail has had such notable sidemen such as Wycliffe Gordon, Jerry Weldon, and Toby Walker. In addition to her performance schedule, she also teaches piano, conducts music and art workshops, leads multi-media presentations on blues topics, and tributes Carole King. Storm has also been on staff at the award-winning Augusta Heritage Blues & Swing Week.

Singer-songwriter and fingerstyle guitarist Robert Bruey grew up in rural New England and lives on Long Island’s North Fork. His roots and how they have helped to shape him are reflected in the original music on his recently released CD, ‘Carousel’, and are even more evident during a live performance. Robert Bruey’s music is honest and real, raw and meaningful, gritty and naturalistic. His deft, spare and unique finger-picking style — with notes carefully left alone to be heard in the moment — provides a perfect complement for his earthy and soulful voice and the meaningful, introspective lyrics of his songs. As a musical artist, he paints with words — imbuing his songs with imagery that enables listeners to visualize his stories as he sings them.Although he cites such diverse artists as Dave Matthews, Van Morrison, Waylon Jennings, Jackson Browne and Damien Rice as influences, Robert Bruey is his own muse blazing his own musical path – one that should lead him into listening rooms and living rooms far and wide.

Wicked Karma – This is one of the most creative, eclectic, out there (yet in there), acoustic guitar duos to emerge in a long time. Dee Harris and Todd Evans have freed themselves to travel wherever they wish to go and have given birth to their own organic music form with no boundaries or confining genre limitations. Theirs is a musical palette uninhibited and flowing with abstract expressionism. Even their song titles are derived from surrealism and the dada law of chance. Sharing a mutual passion for melody and improvisation, their original instrumentals feature striking chordal voicings, with turns of jazz, blues and Indian influenced resophonic slide guitar. It’s all wicked in the best way. It’s all Karma of the highest level.