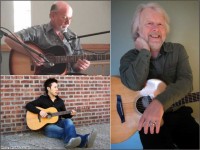 Purchase advance tickets for this event using Paypal or your major credit card. Be sure to select the ticket quantity as well as the appropriate ticket type (Member or Non-Member). Note: If you require multiple ticket types (ie: 1 member + 1 non-member ticket), please add one type to the cart, return to the page, and add the second type separately. Also, members of the Long Island Fingerstyle Guitar Club may purchase tickets for this concert at the FMSH Member price

Canadian finger-style guitarist Bob Ardern is touring the Northeast this Spring in support of his forthcoming album, Craftsman. His previous release, Wires, Rosewood & Roots, was nominated for Best Instrumental Album – Acoustic in the Zone Music Reporter (ZMR) Awards and ranked #6 on its Top 100 albums chart for 2012. ZMR is the music industry organization that tracks new age, world and instrumental music.

Ardern – who grew up in Ontario and resides in Lunenburg, Nova Scotia – combines masterful finger-style guitar playing with melodies that conjure vivid images and then pulls it all together into a captivating sound. With influences from Celtic, classical and jazz music, Ardern’s guitar stylings take listeners on a spectral journey of emotions. Having grown up in the golden era of English folk music, he learned from some of the great names of the genre. While retaining those influences, he also listened to and was affected by Canadian and American roots music and shaped the two styles into his own unique blend.

Howard Emerson is a self-taught guitar player who has been hailed for his expressive and fluid style. He began playing at age 12 and learned to fingerpick in the fall of 1969 wile cutting class at the Berklee School of Music, which he attended, ostensibly in order to avoid the draft. After a very brief stint there, he dropped out and later learned bottleneck and open-tuning, and was very influenced by Ry Cooder, Randy Newman and Little Feat.

In the early-mid-1970s, Emerson recorded and toured with Richard Supa and with folk legend Eric Anderson. During that time, he also played with a band named Topper that eventually became the Billy Joel Band. A touring clinician for the C.F. Martin Guitar Company, Howard also teaches guitar at his Huntington Station home, as well as to students around the world via videotaped lessons. His latest CD, It Ain’t Necessarily So, was released in 2012.

Hiroya Tsukamoto is a gifted composer and guitarist from Kyoto, Japan, who came to the U.S. a decade ago on a scholarship to study at Boston’s Berklee College of Music and now resides in New York City. A finalist in the International Acoustic Music Awards and the USA Songwriting Competition, Tsukamoto wowed attendees during a featured showcase performance at the 2013 Southeast Regional Folk Alliance Conference and also performed in unplugged showcases during last summer’s Huntington Folk Festival. He has released two solo albums – Heartland and Solo – and also has recorded several albums with the multicultural group Interoceanico.