All Types of Kinds (ATOK) + Kate Vargas and The Reckless Daughters 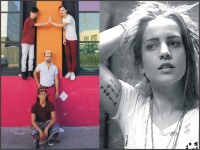 Two young groups from the New York metro area, All Types of Kinds and Kate Vargas & The Reckless Daughters, share the bill during the monthly Hard Luck Café series at the Cinema Arts Centre (423 Park Avenue, Huntington) on Thursday, Jan. 17. The 8:30 p.m. concert in the cinema’s Sky Room will be preceded by an open mic at 7:30 p.m. Tickets are $15 ($10 for Cinema Arts Centre and Folk Music Society of Huntington members) and will be available at the door.

All Types of Kinds (ATOK) is a four-piece band with an apt moniker. This high-energy group performs an eclectic mix of music, ranging from folk to rap and nearly everything in between. ATOK is not a “boy band,” although its members joke that they are a “man-band.” And while they don’t have any planned choreography, all play instruments and write songs. The group’s members harmonize on both originals and choice covers, have a bit of a rock vibe, and it’s not uncommon for a smart rap to artfully make its way into a song.

From gigs in their home state of New York, to a recent summer tour in California followed by shows all over New England and down the coast to South Carolina, ATOK is building a fan base that can’t seem to get enough of its brand of music. Comprised of Billy Conahan, Ray Rubio, Rocco Stroker, and Berk O, ATOK takes its cues from the audience — so that no two shows are ever the same.

A reformed wild child, in recent years Kate Vargas has traded the party for meditation, yoga, and a renewed focus on what she values most—her music. The New Mexico-raised, NYC-based artist is building ever more mindfully on her sound, and the music press is taking notice — with Vargas earning praise from journalists at such media outlets as Billboard, NPR and the Huffington Post.

Vargas has packed houses from Ireland’s Westport Folk and Bluegrass Festival to The Troubadour in London, The Mansion on O Street in Washington D.C. to New York’s Bowery Electric. As evidenced on her most recent album, For The Wolfish & Wandering, which features Vargas singular folk-style storytelling, her songs are grounded in a darkly melodic, reverb-washed sonic palette of dream-pop, dusty folk and junkyard blues — all carried by Vargas’ rough-hewn vocals and guitar playing. In equal measure, she channels a surprising array of artists — from Tom Waits and 16 Horsepower to Lana Del Rey and K. Flay. She also cites Nina Simone as a musical influence. Joining Vargas in concert are her bandmates, The Reckless Daughters.