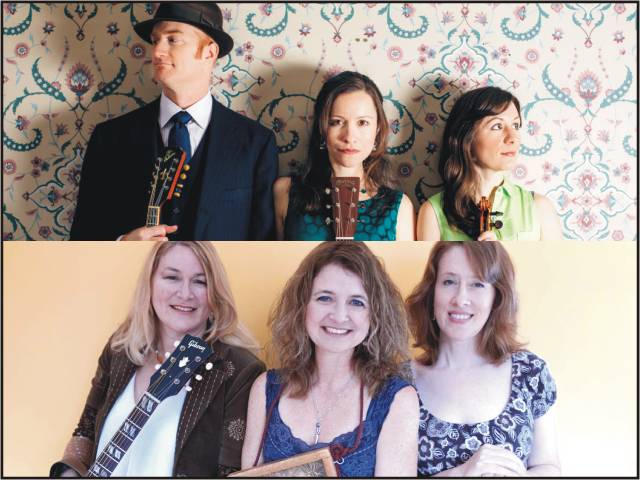 April showers usually bring May flowers. But the Lilies are coming to Long Island a month early. Touring artists The Boxcar Lilies and Low Lily share an April 7 bill as part of the Folk Music Society of Huntington’s First Saturday Concerts series. The 8:30 p.m. concert at the Congregational Church of Huntington (30 Washington Drive, off Route 25A, Centerport) will be preceded by an open mic at 7:30 p.m.

The Boxcar Lilies, an Americana duo from Massachusetts, has been wowing audiences with its vocal harmonies since forming as a trio in 2009. Combining spine-tingling harmony and exceptional songwriting, The Boxcar Lilies have made a name for themselves with their signature mix of folk, country, blues, and bluegrass-tinged Americana music.

Their trademark harmonies may have put The Boxcar Lilies on the Americana music map, but their genuine and charming stage presence and off-the-cuff banter have helped keep them there.

Low Lily, a New England-based string and vocal trio, explores the roots and branches of American folk music with traditional influences and modern inspiration. Liz Simmons (vocals and guitar), Flynn Cohen (vocals, guitar, and mandolin), and Lissa Schneckenburger (vocals and fiddle) are masterful players with deep relationships to traditional music styles — ranging from bluegrass to Irish, Scottish, New England, and old-time Appalachian sounds. When you combine this with stellar composition skills and inventive arrangements, you get music that is rooted yet contemporary. As PopMatters notes, Low Lily has “an incredible knack for putting a little pop twist on a traditional folk/Americana sound.”

In March, Low Lily released 10,000 Days Like These, its first full-length CD. The trio’s previous self-entitled EP was released in 2015. This will be Low Lily’s first LI concert appearance.

Here’s a link to a video of Low Lily performing the new album’s title track live at Celtic Connections in Glasgow, Scotland earlier this year:

And here’s a link to a video of Low Lily performing “House Carpenter,” the opening track on its self-titled EP. It debuted as the most-played song on the international Folk DJ charts in 2015.