Natalia Zukerman’s “The Women Who Rode Away” 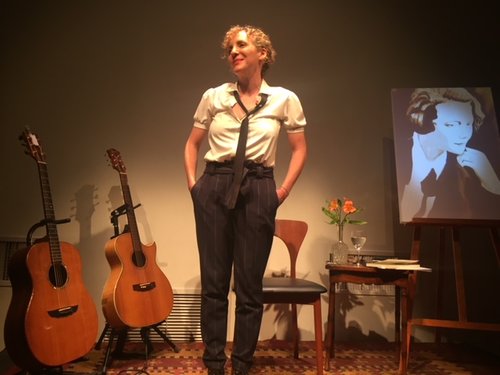 In observance of Women’s History Month, the Folk Music Society of Huntington is pleased to present singer-songwriter Natalia Zukerman’s The Women Who Rode Away as part of its monthly virtual Hard Luck Café concert series that is held in partnership with the Cinema Arts Centre. The multimedia one-woman show will be screened from 8-9:30 p.m. via the FMSH YouTube channel (http://www.youtube.com/channel/UCnJ9zJQXl2ml128-TIPRFLg/about) and Facebook page (http://www.facebook.com/FMSHLongIsland). Although there is no admission charge for this online show, tips for the artist — who has lost many gigs and is unable to tour due to the pandemic — would be most appreciated.

Musician, painter and educator Natalia Zukerman grew up in New York City (the daughter of violist –conductor Pinchas Zukerman and flutist-writer Eugenia Zukerman), studied art at Oberlin, started her mural business (Off The Wall) in San Francisco, began her songwriting career in Boston, and now resides, writes, plays, teaches and paints in the Hudson Valley.

Zukerman has released eight independent albums and has toured internationally as a solo performer since 2005. Her music can be heard on the soundtrack of several seasons of The L Word and ABC Family’s Chasing Life. Alongside her touring career, Zukerman continues to paint private and public murals as well as illustrate children’s books, design and paint sets for plays in New York City, and paint private portrait commissions. In February 2017, she became a Cultural Diplomat for the U.S. Department of State — playing concerts and conducting workshops with her trio, The Northern Lights, throughout Africa. Zukerman teaches private songwriting lessons and has taught at various programs and festivals throughout the US and in Canada. Last March, she co-produced an online music festival called Shut In and Sing which ran for eight weeks and provided immediate financial relief to hundreds of independent musicians at the beginning of the lockdown. Since then, she has been performing livestream shows, teaching, coaching, running an integrative wellness platform, painting, gardening, studying for her yoga teacher certification and is the artistic director and the director of youth and family programs for SoulCall Global.

About The Women Who Rode Away

While an artist in residence at the cell theatre in New York City in May 2018, Zukerman developed her multimedia one-woman show, The Women Who Rode Away. Edifying and entertaining, the show seamlessly melds the talents of the songwriter, painter, and storyteller into a moving evening of reflection and perseverance. Featuring original music and projected paintings by Zukerman, this intimate portrait recounts the artist’s journey of finding her own voice through the stories of the women in her life that paved the way.

Bill Hurley, producer of The Extended Play Sessions, calls The Women Who Rode Away “ one of the most compelling and riveting events we have ever hosted.” He says: “It speaks of empowerment, struggle, tolerance, perseverance and history, and the timeliness of this project could not be more poignant. A woman, seated alone on a stage, paying tribute to women… with beauty, style, grace and a boatload of talent!” Says Jenna Kunselman (Inside Off The Wall): “Zukerman highlights each of these women through story, song, and visual art, revealing a remarkable songwriting ability, notably exceptional guitar skills, a lovely voice, and an extraordinary artistic vision.”

“Natalia’s voice could send an orchid into bloom while her guitar playing can open a beer bottle with its teeth.” –New Yorker