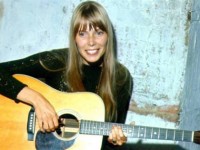 FMSH joins with the Cinema Arts Centre in co-presenting the latest installment in Bill Shelley’s Music Legends Live series at the Cinema on Tuesday, May 14, at 7:30 p.m. Entitled Joni Mitchell: Happy 75th Birthday Celebration, this special program will feature archival footage of the Songbird of Saskatchewan performing some of her classic songs – including “Big Yellow Taxi,” “Both Sides Now,” “Chelsea Morning” and “Woodstock.”
After starting out performing folk songs in Canadian cafes and bars, Joni Mitchell migrated to California in the mid-1960s. There she befriended fellow musician David Crosby of The Byrds, who helped her to secure a record deal. Success followed with Judy Collins’ recording of “Both Sides Now,” before Joni found superstardom with her song “Woodstock” – made famous by Crosby Stills Nash and Young. Buoyed by the success of her albums Ladies of the Canyon and Blue, Joni became the decade’s most accomplished female singer-songwriter. She also used her skills as a painter to design numerous album covers for herself and others. Ever changing and challenging herself as a musician, Joni also experimented with jazz, fusion and electronica during the 1970s and beyond.

Tickets for this special event, which also includes a discussion and a reception afterwards, are $16 ($11 for CAC and FMSH members) and may be purchased in advance or at the door.