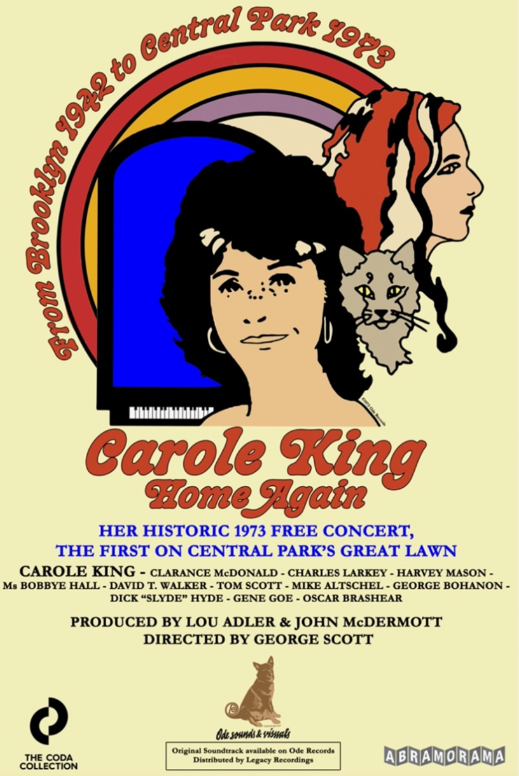 Alongside the complete performance footage is the behind-the-scenes story of King’s remarkable transformation from an in-demand staff songwriter beloved for such timeless Goffin and King classics as “(You Make Me Feel Like) A Natural Woman” and “Will You Love Me Tomorrow?” to an iconic artist in her own right. The May 1973 performance captured King at her critical and commercial peak, basking in the enormous popularity of her definitive album, Tapestry.

New interviews with King, Adler, Ron Delsener and legendary Woodstock and Monterey Pop lighting and stage manager Chip Monck set the scene for her extraordinary performance. To the delight of the audience, King moved easily between her signature classics and songs from her soon to be released 1973 album, Fantasy. King rarely performed in concert during this era despite the enormous commercial success she had enjoyed. However, on this special occasion, she presented her performance in two parts—first alone, on piano, and then fronting a powerhouse 11-piece band.

The resulting film, Carole King: Home Again – Live in Central Park, provides an inside view of a generational talent in her prime, performing one of the biggest and most momentous concerts of her career in the city where she was born. “Tapestry had become such a huge hit, and I really wanted to give something back to the people,” remembers King. “When I first walked on stage, in Central Park, in front of the Great Lawn, and it’s full of people…it was kind of terrifying for a minute. Then the crowd began to cheer and it was like a wave coming toward me. There was just so much love. It was too much to take in but I realized all I had to do was sit down and start playing. They were there to hear me. I knew how to deliver, and that’s what I sat down to do.”